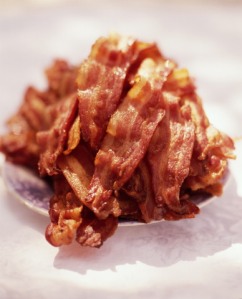 Homer: I’ll have the smiley face breakfast special. Uhh, but could you add a bacon nose? Plus bacon hair, bacon mustache, five o’clock shadow made of bacon bits and a bacon body.
Waitress: How about I just shove a pig down your throat? (Homer looks excited)
Waitress: I was kidding.
Homer: Fine, but the bacon man lives in a bacon house!
Waitress: No he doesn’t!

I think if you ask most vegetarians they will tell you that what they miss most about the omnivorous life, they’ll tell you, “bacon”.  Of course! What’s not to love about bacon? Humans are genetically programmed to love fat and salt.

There are some vegetarian bacon substitutes on the market and some of them are pretty good and give you that bacon flavour to accompany your eggs or your BLT. It’s not quite the same, but it will do. And we have the comfort of knowing that while it might not be completely bacony, at least no pigs had to die. 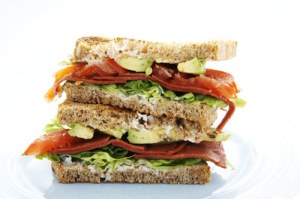 Making real bacon is not complicated. They take some pig meat and cure it in brine with tons of salt. Then you fry it and eat it. Some bacon is dried for a while in cold air or boiled or smoked.

Bacon is usually made from pig buttocks, but there are other types of bacon made from other cuts of meat. In the US, bacon is made from pork belly to produce the American “streaky” bacon.

There’s also back bacon made from cured pork loin in the middle of the pig’s back. It’s very lean and meaty and ham-like. It’s the preferred style of bacon in the UK, I understand, though Americans often refer to it as Canadian bacon. No one knows why. Seriously — who eats this stuff in Canada??? 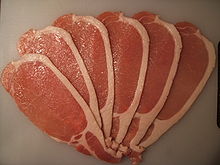 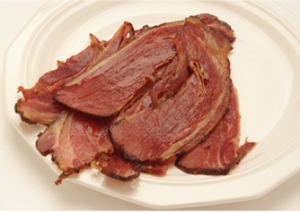 Jowl bacon is cured and smoked cheeks of pork. 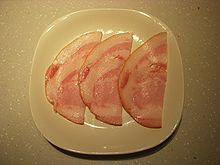 Slab bacon is very high in fat and is made from the pork belly (also known as fatback). 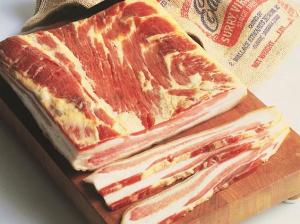 Collar bacon is taken from the back of a pig near the head. 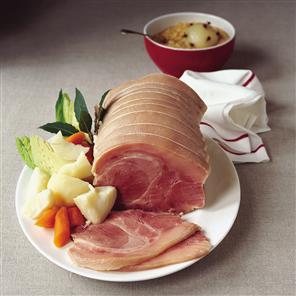 Peameal bacon is a variety of unsmoked back bacon, brined and rolled in a meal made from ground yellow peas or cornmeal.

Picnic bacon is from the shoulder under the blade. It’s lean but also tougher than other bacon. 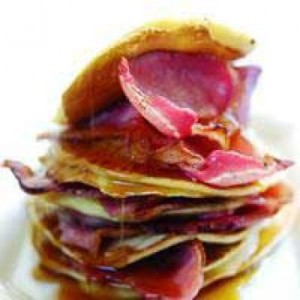 More than 2 billion pounds of bacon is produced in the U.S. each year.

In fact, in the US and the UK in particular, a whole bacon cult has developed with bacon being added to every imaginable food and/or drink.

Not too long ago, the Bacon Explosion became an internet sensation and the most popular recipe on the internet in both the US and the UK. It’s a 5,000 calorie, football-sized  pork dish where you wrap bacon around a filling of spicey sausage and crumbled bacon. Then you wrap it in foil and bake in or smoke it on the BBQ. 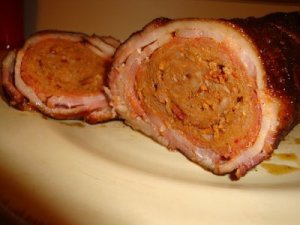 There’s bacon-flavoured vodka, called (appropriately enough)  Bakon Vodka, with the tagline: “Pure. Refreshing. Bacon.” With it, you can make a “bacon shot” by crumbling fried bacon in the bottom of a shot glass and adding some Bakon Vodka. 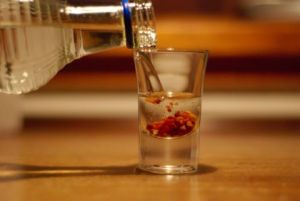 There’s bacon chocolate, bacon ice cream, bacon candy, deep-fried bacon, chicken-fried bacon, bacon-fried chicken – or how about a bacone? This has a week’s worth of saturated fat and a day’s worth of calories and salt. It’s a cone made out of bacon, filled with scrambled eggs and country gravy, and topped with a biscuit. 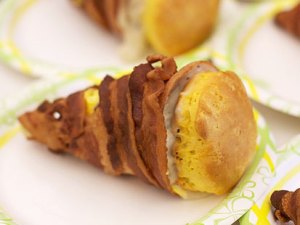 Each year, on the Saturday before Labour Day, some countries celebrate International Bacon Day . This year it will be September 4th. You spend the day eating bacon and bacon products, watching Kevin Bacon movies and/or other movies starring pigs such as Babe.

There are Bacon-of-the-month clubs, bacon camps all over the US and Canada, and a whole host of bacon blogs and websites.

Bacon has absolutely no nutritional value. It’s pretty much just fat and salt with a teeny bit of protein. 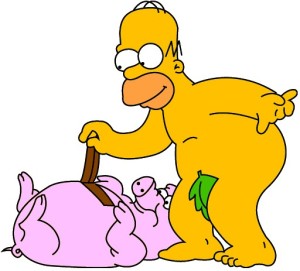