While we were there, we put our names in for the weekly food basket draw. Here’s the market host collecting donations for the baskets from all the vendors. 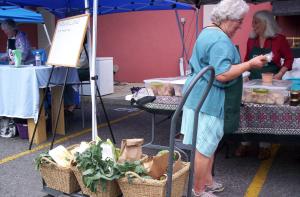 Then we bought honey from these bees. 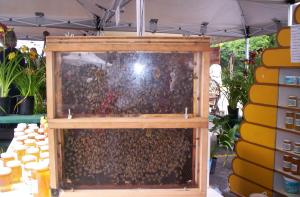 And some misshapen cucumbers.

We followed the caliope sounds to this organ grinder.  No monkey. 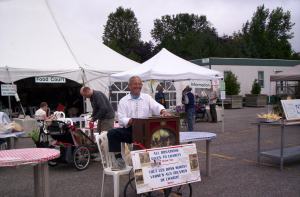 Oh boy — mushrooms. Lots and lots of wonderful, fabulous mushrooms. Don’t touch them though or the nice French lady will get very angry.

We had to stop and get some fruit from this vendor from Beamsville. Beamsville is down near Niagara Falls. It’s only his second week here and the fact that he’s not local caused a bit of controversy. He left at 11:00 pm last night in order to get here for 6:00 am. I asked him if it was worth it. He said it was last week. (The peaches and plums were great. I hope they let him stay).

I didn’t buy any garlic because I still have a bunch, but the garlic people were very jolly looking among their garlic, so I wanted to take their picture.

By this time we were loaded down with goodies and wished we had one of these handy pack-poodles.

For the next 3 weeks the Lansdowne market will be along O’Connor Street between Homwood and Fifth Avenue because of the SuperEx. If you have parking problems, they’re offering a free shuttle service on Sunday’s from St. Paul’s University parking lot.